The Next Generation Very Large Array Learning Center expands the NRAO site on the San Agustin Plains to support STEM education while providing an enhanced experience for tourists.
Artist renderings courtesy of NRAO

Since its commissioning in 1980, the Very Large Array in Socorro County has seen continuous upgrades and additions, a recently announced planned project would expand and enhance learning opportunities for STEM students.

To that end, a National Radio Astronomy Observatory press release said Associated Universities, Inc., which operates the NRAO under a cooperative agreement with the National Science Foundation, is submitting a request for expenditures directed by Congress for $10 million for a Next Generation Learning Center project at the Very Large Array.

Dave Finley, NRAO Socorro press officer, said the proposed learning center would be a state-of-the-art facility serving both STEM education and potentially providing an economic boost to the county of Socorro.

“One of the things we hear people complaining about trying to attract new industry here is that we don’t have enough highly skilled STEM personnel here in the state to provide the workforce. work that would attract this kind of economic development,” he said. “So we would play an important role in attracting students into these science, technology, engineering and math careers.

“And do that by providing training and resources for both formal K-12 education, and also informal education, which is the kind of thing we do with tours and events for the public. at the VLA,” Finley said. “We have a lot of great STEM jobs here in New Mexico. With NRAO, New Mexico Tech. with different universities. With Sandia and Los Alamos Laboratories, etc.

The idea is simple; to create a facility adjacent to the Network Operations Building that would serve for in-person and virtual STEM education to K-12 students, and expand and improve the Visitor Center, Finley said.

“We believe this will help develop a diverse and globally competitive STEM workforce by attracting New Mexico students, who are 60 percent Latino and 11 percent Native American, into STEM careers. “

The proposed next-generation learning center at the Very Large Array would incorporate and expand on what the VLA has provided over the years.

“We’ve had a visitor center since 1983, and its exhibits have evolved over time,” Finley said. “We call it a center of learning because it will certainly continue to be a visitor center with much improved exhibits and a much better experience for tourists, but it will be a hub for STEM education. “ 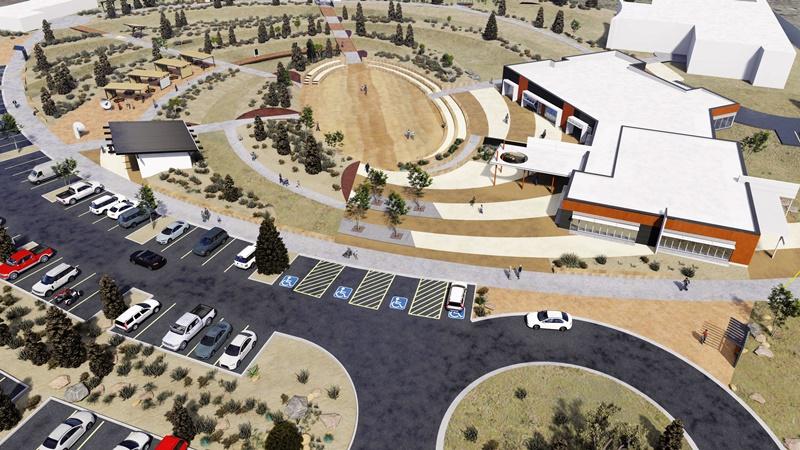 The next-generation VLA learning center will be located adjacent to the array operations building.

“It will attract more tourists and of course have an economic impact right here for the local community,” he said. “We get tens of thousands of visitors every year, before COVID, and they come from all over. I looked through the guest book that people sign a year and it was all 50 states and over 40 other countries.

He said NRAO has been working on this upgrade for some time.

“It’s not something we just made up,” he said. “We now have a concept design. We hired an architecture firm. We have a fundraiser on board.

The choice of location was obvious.

“It will be over there at the VLA where we are now,” he said. “It’s right where people have been driving for many years.”

Plans are to start with the old cafeteria building which has not been used as a cafeteria for many years and build it from there.

“We are going to renovate and modify it, and also build an extension there,” he said. “We spent many hours with an architect walking through the area who asked many questions about what we wanted and then came up with a design that incorporated what we thought we needed.”

Finley said the final concept is the result of finding out what other people would support and need.

“We’ve turned to a lot of people for advice and support, basically, in what they want,” he said. “And the result is that we got unanimous support for it.”

He said the project is estimated at around $20 million.

“The total budget is $20 million, so we’re asking Congress for half of that in a Congressional-directed spending request. It’s a Senate committee that can put that appropriation in the budget,” Finley said. “Our senators especially wanted to see expressions of community support, and we got that from those institutions.”

At its last meeting, the Socorro County Commission passed a resolution in support of the project.

The resolution calls for Sen. Ben Ray Lujan to submit the request for Congressional funding.

“Sen. Lujan and Senator Heinrich will pitch to the Senate committee. What they needed was all this show of support from the local and regional community and across the state to convince this Senate committee that we should get that $10 million,” Finely said. “We’ve also been in close communication with Yvette Herrell’s office, as well as Melanie Stansbury in Albuquerque, ‘They’ve been working with us on that.’

Ultimately, the new facility will normally be part of the NRAO budget.

“Our funding agency is the National Science Foundation,” he said. “They are very supportive of STEM education, both formal and informal, and so it will be part of our normal VLA operation and then the next generation of VLA.”

Additionally, admission fees and sales from the gift shop will contribute significantly to operations and maintenance support, Finley said. “And it’s all going to be based here in Socorro County.”

Big Four company KPMG has announced that its long-awaited learning and development center, now dubbed “KPMG Lakehouse”, is scheduled to open in January 2020. In its first year, the Orlando, Florida center is expected to accommodate 32,000 KPMG staff on its 55-acre campus with “over a million hours of in-person professional development,” according to the […]

A new University of Georgia facility will enhance research, education and public awareness at one of the most ecologically and historically significant sites along the Georgian coast. The university on Thursday, March 3, opened the $1.8 million Center for Experiential Learning to expand educational opportunities at the Wormsloe Research and Education Center. CREW, a unit […]